Age Related Macular Degeneration (AMD) is a progressive eye disease that affects the central region of the retina known as the macula. AMD typically starts affecting vision in persons over 60 years of age. While AMD affects both eyes, the disease progresses asymmetrically. AMD usually does not cause total blindness, it does cause loss of central vision and legal blindness. Activities that require central visual acuity, such as reading, recognizing faces, watching television, or driving become increasingly difficult or impossible for the patient.

How many people are
affected by AMD?

AMD accounts for approximately 8.7% of all blindness worldwide and is the most common cause of permanent central vision loss in developed countries. Contributing factors include aging, genetics, and lifestyle factors such as cigarette smoking, fitness, and diet.

What are the
symptoms of AMD?

AMD is characterized by the progressive loss of the central vision with symptoms that include the distortion of images and straight lines, blurred vision characterized by difficulty reading, recognizing faces, seeing in dim light, and driving at night. These changes will frequently lead to challenges navigating daily activities, increased dependency on others to help, and ultimately, the loss of independence.

What are the types of AMD? 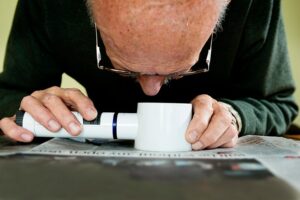 Dry AMD occurs in both eyes and always progresses, although at variable rates depending on a person’s genetics, smoking status, nutrition, and overall health. It develops and progresses through several stages of increasing severity known as early, intermediate, and late with late AMD characterized by atrophy in the macula. Progression occurs slowly over many years and there are no treatment options except vitamin supplementation and a diet rich in green leafy vegetables that may marginally slow the rate of progression. Dry AMD is also referred to as non-exudative or atrophic AMD.

Wet AMD arises from dry AMD and is the less common form of the disease. When abnormal blood vessels grow, leak into the back of the eye, damaging the macula, it is referred to as wet AMD. Vision loss can occur more rapidly than in dry AMD and if left untreated, vision loss develops over days or weeks. This process is also referred to as exudative or neovascular AMD.

Are there any treatment options for AMD?

There are currently no treatments available to help patients with dry AMD beyond the diet, vitamin supplementation, and lifestyle recommendations. Though it is understood there is a genetic component to developing dry AMD and active research continues in this area, OcuDyne is researching the role of ocular perfusion in accelerating the severity and asymmetrical progression of the disease.

The current treatment for wet AMD includes frequent, repeated injections of drug into the eye. While the goal of these injections is to convert wet AMD back into the less aggressive dry AMD, central vision loss will continue. These injections typically slow the loss of vision, but they are not curative.