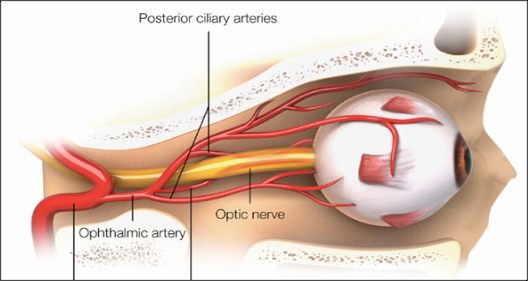 OcuDyne began over a decade ago with the hypothesis that compromised blood flow to the back of the eye exacerbates the progression of AMD as well as other eye diseases.

This hypothesis considers that complement activation, known to be associated with AMD, and neovascularization, known to be associated with wet AMD specifically, are both driven by the lack of oxygen and nutrient exchange in the retina. The lack of oxygen due to compromised blood flow in any tissue of the body is called hypoxia. It has long been established that complement activation and neovascularization are exacerbated by hypoxia.

OcuDyne’s contribution to this body of knowledge includes the discovery of compromised blood flow to the back of the eye that is progressively impaired as the stages of AMD progress, especially in the dry form of AMD.

By the time the disease progresses to the late form of AMD that includes both wet and dry forms, profound vision loss can be experienced. Current drug based treatments for wet AMD can provide some relief by blocking the neovascularization and exudation; however, drug based treatments for dry AMD currently in development, will not restore lost vision, but only slow continued vision loss. Improved ocular perfusion may provide a potential treatment that could slow the development and progression of both the neovascularization in wet AMD and the atrophy in dry AMD.

To initially test the hypothesis that compromised blood flow to the back of the eye may be exacerbating the disease process, a high field strength MRI research project that included eyes with and without AMD was conducted.[1][2] This study demonstrated a statistically significant correlation between reduced blood flow in the ophthalmic artery and AMD disease progression.

OcuDyne has a robust pipeline of over 40 filed and issued US Patents covering a variety of R&D initiatives.